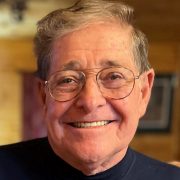 William Archie Coffman Jr, 79, died January 21, 2022, in Lexington, Kentucky. Born June 25, 1942 in Louisville, Kentucky, he was the son of the late William Archie Coffman Sr. and Sara Ellen Robertson Coffman. Archie graduated from Junction City High School in 1961 and was a lifelong resident of Junction City. He began cutting hair at the age of fourteen in his father’s barber shop and graduated from Barber School in Louisville, Ky. In 1962. Archie started his announcing career at the Airport Speedway in Junction City, Ky. In 1972, he was instrumental in the building and promoting of the Ponderosa Speedway, where he was the manager and announcer. In 1976, he took over his family’s general store, which is now known as Coffman’s Little Mall and soon added the Trophy and Tire Shop. His demolition derby career started in 1977 at the Bluegrass Fair in Lexington, Kentucky, which led to the formation of Coffman’s Production Company, a motorsports production company which included monster trucks, truck pulls, demolition derbies, mud slings, and tractor pulls throughout Kentucky. In 1978, Archie began his auctioneering career, which continued throughout his life. He also had an extensive announcing career with Pro Shows Incorporated doing motorsports throughout the Eastern United States. Most recently he was an announcer and emcee for TNT Truck and Tractor pull. Archie was a Kentucky legend, a colorful character, with many catch phrases he used as an announcer and will be remembered by such as “Get Back Bumperjack” and “He’s Tough, he’s Monster Tough!” He was loved by many, will be forgotten by none and was tough to the end. Archie was the proud owner of Coffman’s Little Acres, the family farm. He loved fishing and most of all he loved his family. He will forever be missed.