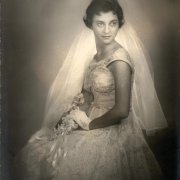 Ruth Watson was born on October 20, 1926 in Hyden, KY, to Robert Dixon and Bess Lewis Dixon.

Ruth’s father was a civil engineer for Blue Diamond Coal Company and Henry Ford, who left on surveying jobs for months at a time. Ruth’s mother was an accomplished horse woman and healer, who was best friends with Mary Breckinridge of the Frontier Nursing Service. When Ruth was just five years old, her mother died of pneumonia after fording the river on her horse to get from her father’s home and back to her children. Ruth attended Glendale School in Glendale, KY before moving to Detroit, MI to live with her aunt and uncle.

Ruth graduated from Northwestern, Detroit, MI in 1943, earning her degree in Business. She began her career as the youngest court reporter in Kentucky, at the age of 18, by appointment as Special Examiner by Judge Roy Helm (a later Kentucky Supreme Court Justice). While in Hazard, she was a member of the Beta Sigma Phi Sorority and the Eastern Star.

Contemporaneously, she was a self-employed legal secretary. Ruth was an accomplished pianist, who played by ear, and played for the Baptist Church in Hazard. After learning of the death of her brother, Harold, a Japanese prisoner of war, she moved her career to Chicago, IL to assist her sister, Elizabeth, with her children. Immediately upon arrival, with a recommendation letter in hand from Carl D. Perkins, U.S. House of Representatives, she began working for a large Chicago firm. While there, she tested and received clearance to work internationally at any U.S. Embassy. She also learned braille and was a teacher for blind students in both Hazard and Chicago. After Chicago, she moved to Ft. Lauderdale, FL where she was secretary for the Magistrate Judge of Broward County.

Ruth first met her husband while working at the courthouse in Fort Lauderdale. When Ruth asked Judge James H. Walden, of the 15th Judicial Circuit Court for Palm Beach and Broward Counties (and later Chief Judge of the 4th District Court of Appeals), if he knew of anyone needing legal secretary services, he referred her to Jake Watson, a young new lawyer who was just beginning his practice. She accepted the position with him, and worked for him until he questioned her shorthand notes. She summarily, quit. It was then that Jake began his courtship through frequent visits to the courthouse, luncheon dates, and dinner. He figured out he had to marry her to get her back; she said yes. They married June 23, 1956 at her sister Annalee’s home in Woodland Park, Hazard, KY.

Jake’s sons, Douglass and David, joined him with Ruth. Lesa joined her parents and her brothers the following year. Jake was the surprise baby, born nine years after Lesa. They lived in Hollywood, Florida where Jake continued his practice of law with Ruth’s assistance.

In Hollywood, Ruth served in multiple civic organizations, including the Broward County Lawyers’ Wives Association, Democratic Women’s Club, Daughters of the American Revolutionary War, American Legion, Veterans of Foreign Wars, Hollywood Civic Enrichment Center, chairman of several state candidate’s campaigns for public office, and the Art League. She was a licensed interior designer. She and Jake were both licensed to navigate open seas. Ruth and Jake loved international travel, and traveling with all their children. In fact, the couple was in Havana, Cuba when Batista fled the country and Fidel Castro laid siege to the Hotel Nacional; they left on the on the last plane out of Cuba.

When Ruth’s father passed away in 1973, Jake’s longtime love for the rolling hills of the bluegrass caused Jake and Ruth to buy a historic farm located in Boyle and Mercer Counties. Ruth utilized her design skills to restore the historical mansion built in 1850-Lynnwood of Mercer. While in Danville, she was fond of her membership in “The Birthday Girls.”

Ruth was a biblical scholar, able to quote you any passage, and later in life became a member of the Aquarian Christine Church Universal. She was an avid reader, and NY Times crossword puzzle solver. Ruth, who never used a dictionary, was undefeated in Scrabble until December 2021, when she let Lesa win one game.

Ruth was a rainbow, and always wore exceptionally coordinated attire. She had a memory that spared neither detail nor accuracy. For every story, she could tell you what day of the week it was, what she was wearing, what you were wearing, and what the weather was like. She was truly a wealth of knowledge and historical details from ancient history to current politics. She was a life-long liberal Democrat, and a fervent advocate for those deprived of their civil, constitutional, and human rights. She supported the Southern Poverty Law Center and St. Joseph’s Indian School.

In Ruth’s latter years, she delighted in accompanying Lesa on her travels far and wide to conduct investigations, and was often called upon to use her long-time, well-honed shorthand skills to document interviews. She cherished the friendships that she made with the legal teams through those experiences.

To quote a friend’s comment, “Ruth was a classy lady, with a wonderful heart that could fit in with anyone of any age.” This is true. Those of us who were blessed to know her on this earthly realm are enriched.

A Celebration of Life for Mrs. Ruth Watson will be held on Saturday, July 30th at 4 p.m. at Stith Funeral Home in Junction City.

Memorial donations can be made in Ruth’s name to: