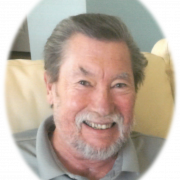 Rob graduated from Glenbard West in 1969 in Glen Ellen, Illinois. While there, Rob participated in baseball and basketball, but what he really excelled in was choir.

Rob graduated in 1973 from De Pauw University in Green Castle, Indiana, with a degree in Voice.

Rob’s voice and cooking skills will be missed by those who knew him well.

Per family wishes, there will be no service or memorial.

In lieu of flowers, please donate to the National Wildlife Foundation.