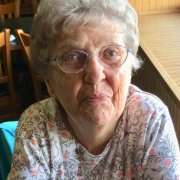 Rita Maydelle Renn Jarboe, 100, died peacefully at the Willows in Harrodsburg, KY on Sept 15, 2022 surrounded by her family. Rita was born at home in Louisville, KY on April 17, 1922, to Matthew and Anna Renn. She attended St. Ann grade school and Ursuline Academy in Louisville, KY, Milwaukee Downer College in Wisconsin, Sienna Heights College in Michigan, and Philadelphia School for Occupational Therapy. She worked as an OT at Nichols Army and V.A. hospitals from 1946 to 1949. She married Benedict Jarboe Jr. in 1949, and after having 7 children, she worked as an OT at United Cerebral Palsy from 1961 to 1972 and Commission for Handicapped Children from 1972 to 1985. After retirement she enjoyed traveling with Ben and doing many arts, crafts, and playing music. She was active in the Louisville Dulcimer Society, St. Rita Parish and St. Vincent De Paul soup kitchen in Louisville, then after moving to Danville in 2009, she played with the St. Peter and Paul and Danville Dulcimer groups. She loved going to community activities and never missed an opportunity to dance.
Rita was predeceased by her husband Ben of 56 years, a granddaughter Shelly Harris, and a son-in-law David Patterson. She is survived by her children: Michael (Dottie), Nancy Patterson, Karen (Nanci Moore), David (Nancy Wright), MaryEllen Leis (Albert), Lisa Schneider (Randy), and Kevin. She is also survived by 5 grandchildren, 8 great grandchildren and 1 great- great grandchild, and many extended family and friends.
Rita was a member of St. Rita Church in Louisville from 1957 to 2009 and Sts. Peter and Paul Church in Danville from 2009 to present. Visitation will be 4 p.m. – 6 p.m., Tuesday, September 20, 2022 at Stith Funeral Home. Mass will be 11 a.m., Wednesday at Saints Peter & Paul Catholic Church with Father Anthony McLaughlin officiating. She will be buried alongside her husband at Calvary Cemetery in Louisville at 2 p.m. In lieu of flowers, donations can be made to Heritage Hospice of Danville, Sts. Peter and Paul Church of Danville, St. Rita Church or St. Vincent de Paul Society of Louisville, or the Mass of the Air.