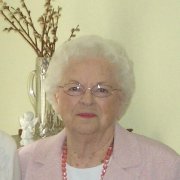 Mildred Boyd was born October 2, 1922, in Ewing, Kentucky to the late Leona and Henry Hobson Buchanan. She attended school in May’s Lick, Kentucky and graduated Valedictorian of her high school class. She attended Bethel Women’s College in Hopkinsville, KY and later graduated from The University of Kentucky in Lexington as a music major.

She met her husband of 64 years, James R. Boyd at UK. He was an electrical engineer in the Army ROTC. They were married July 3, 1944. They left the next day on an Army train bound for New Jersey where her husband was stationed before being shipped to the Pacific to serve in World War ll. She returned to May’s Lick for the balance of his service and taught music there until 1946.

Upon his return from Japan the couple located to Winchester, KY. Her husband was an engineer with Southern Bell Telephone and Telegraph Company. She followed him to Hopkinsville, Louisville, and finally Danville, KY.

She is survived by two children, James H. Boyd (Martha) of Danville, KY and Jane Boyd (Peter Koeppe) of San Diego, CA. She also had two grandsons Lee (Amy) Boyd of Elkhorn City, KY and Charlie (Molly) Boyd of Danville, KY and three great grandchildren, Henry, James, and Helen Boyd of Danville, KY. She has been a member of Lexington Avenue Baptist Church in Danville since 1959, teaching Sunday School and occasionally playing the piano. Mildred taught fourth grade at Jennie Rogers Elementary School in Danville for years. She was an accomplished piano player and often played for her friends and fellow residents at McDowell Place where she lived for 13 years after her husband passed away. She could play almost any song she heard.

She passed away at the Willows in Harrodsburg July 6, 2022. Visitation is Monday, July 11th from 11:00-1:00 at Stith Funeral Home followed by a graveside service at 1 pm at Bellevue Cemetery. In lieu of flowers memorials may be given to Danville Boyle County Humane Society. The online guestbook and our Hugs from Home program are available at www.stithcares.com.