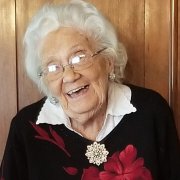 Visitation will be Monday, September 12th 11:00 am to 1:00 pm at Stith Funeral Home, followed by a graveside service at Bellevue Cemetery in Danville, KY

A memorial service will be held later at Westminster Village, Clarksville for friends in the southern Indiana and metro Louisville area.

Mary was a 1942 graduate of New Albany High School, New Albany, IN. She was inducted into the New Albany High School Alumni Hall of Fame in 2017
for outstanding work within the community. Married three times to three loving husbands, Mary had no children, but was fondly known as Aunt Mary to 20 nieces
and nephews and numerous grand nieces and grand nephews. She was preceded in death by two nieces, Janet Marie Arnold and Kimberly Rose Culler.

Mary was an active antiques dealer specializing in Haviland China. She loved family dinner parties and catering large church meals at
Central Christian Church in New Albany where she was a member for over 70 years. With all three of her husbands, she owned and operated Yesterday House,
an antiques business that expanded into catering for weddings, reunions, and holiday events. She worked to build Muir Manor named for her first
husband, as affordable apartments for Seniors over 60. She organized and directed a singing group known as the Silvertoners for over 30 years. The group
was known throughout the community as they performed at schools, nursing homes, holiday events, community events, retirement centers, malls, and held public
concerts.

Mary was a force of nature, independent, feisty, but always optimistic and positive. She was often the glue in the family helping her
father, brothers and nieces and nephews through the ups and downs of life. She served her church and community with the same devotion.

A memorial service will be held on Thursday, September 15th at 3:00 at Westminster Village, 2200 Greentree N., Clarksville, IN for friends in the southern Indiana and metro Louisville area.