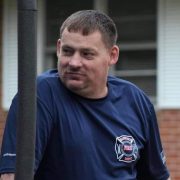 Lawrence Calvin “Wahoo” Chaffee Jr., 47, died on October 8, 2022, in Colorado.  He was born in Houston, Texas on January 8, 1975, to the late Lawrence and Barbara Smith Chaffee Sr.  Lawrence was a member of Stanford Baptist Church.  He loved being a firefighter for the City of Stanford Fire Department.  He loved the Denver Broncos, camping, travelling, his dogs, and collecting guns.  Wherever “Wahoo” was he was the life of the party.

Lawrence is survived by his wife, Angela Sue Chaffee; brothers, Bobby Smith, Richard Chaffee, James Chaffee, and Shawn White; sisters, Laurie Chaffee, Sandra Alarron, and Christal Rogers, several nieces and nephews.  He is also survived by Julian, Justin, Kassandra, and Kaleb Clifton, who might as well as have been his children.

A memorial service will be held on Saturday, November 5, 2022, at 1pm at the City of Stanford Fire Department at 400 East Main Street in Stanford.  An online guestbook is available at wwww.stithcares.com