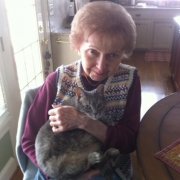 The funeral mass will be held at St. Peter and Paul with burial to follow in Bellevue Cemetery.

Joan Ruth (Andrews) Doherty, daughter of the late Anna and John Andrews, was born in Cleveland, OH in 1931. Joan met the love of her life, Edward F. Doherty, while working at American Greetings in Cleveland, OH, and they married June 1, 1957.

Ed and Joan moved to Kentucky in the late 60s, when the American Greetings plant opened in Danville, which quickly became a city she loved, where she developed deep roots and friendships, and where she continued to live for more than 50 years. Joan was a devout member of St. Peter and Paul, planned many parties and events at Danville Country Club throughout the years, and participated in fundraising events. She was a former member of the Ephraim McDowell Hospital Auxiliary and created arts and crafts with friends for years.

Joan was a true friend to all, her kindness and generosity felt immensely by those who knew her. She was an immeasurable force; her passionate love of life, music, dancing, tennis, gardening, and baking Christmas cookies was only eclipsed by the deep love and joy she felt being mother to her beloved daughter, Krista Mae Doherty, her best friend, constant companion, and confidante.

Joan was admired and loved greatly by a host of nieces and nephews in the Cleveland, OH, and Boston, MA, areas. She is preceded in death by her husband, Edward F. Doherty; her mother and father, Anna and John Andrews of Cleveland OH; and her brother John “Archie” (Joanne) Andrews, sister in-laws, Catherine McGrath, Mary Flannery and Eleanor Safrine.

The funeral mass will be held at St. Peter and Paul with burial to follow in Bellevue Cemetery.

In lieu of flowers, donations can be made to the Alzheimer’s Association. Online guestbook and Hugs From Home can be found at www.stithcares.com