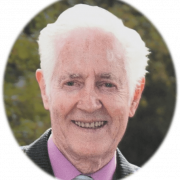 Burial services will be held at a later date.

Jerome Daniel “Jerry” Kennedy, Sr. 93, died May 22, 2022, in Danville, Kentucky. Born April 2, 1929, during the Great Depression, Jerry came from humble beginnings. Jerry’s father, James Joseph Kennedy, was a railroad passenger conductor, and his mother, Vineta Margaret Strate, was a furrier. His father divorced Vineta, causing her to struggle to support herself and her son. Jerry was eventually placed in a foster home on a small dairy farm and raised by Rueben and Sadie Vautsmeier, where he went to a one room schoolhouse for his elementary and middle school education. He later went back to live with his mother Vineta and graduated high school. Jerry worked his way through the University of Illinois, graduating with a Bachelor of Science Degree in Electrical Engineering. He then worked at McDonell Aircraft as a design engineer. Afterwards Jerry was drafted into the United States Army and fought during the Korean War, where he tested AN/MQP-10 counter mortar locaters along the front, from 1951-1953. He married Norma Jean Kennedy in 1952. Jerry served as president and vice-president of numerous computer companies, many of which he started or co-started, in an industry which he loved. This career sent him to over 55 countries, where he sold early analog and digital computer systems. Jerry retired from the computer industry at the age of 80. He served as president of the Palo Alto California Rotary Club in 1971-1972 and was a longtime member of the Danville Rotary Club. Through Rotary, Jerry went to international meetings and made lifelong friends from all over the world. Jerry loved the outdoors and riding pleasure horses on the trail. He owned American Saddlebred Show horses. Jerry was an active member in California of the Presbyterian Church. He lived in numerous states, including Illinois, New Jersey, California, Washington, and finally Kentucky. His smile and wit were infectious, and he never met a stranger.

A private burial will be held at a later date in Freeport, Illinois. In lieu of flowers, please donate to the local charity of your choice. The online guestbook and our Hugs from Home program are available at www.stithcares.com.