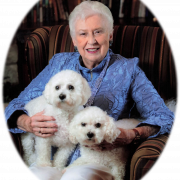 Frances Brown Caldwell Martin, 95, died August 9, 2022, at her home.  Born June 4, 1927, in Danville, she is the daughter of Peter Gentry and Mary Brown Caldwell.  Frances lived in Danville most of her life, growing up on the family farm.  She graduated from Danville High School in 1946 and enrolled in Centre College where she was voted Carnival Queen and graduated with a B.A. in Home Economics.  She met her husband, Joe Martin, at Centre College. They married in 1950, lived in Florida and eventually moved back to Danville.  They celebrated 67 years of marriage prior to Joe’s death. In addition to her husband and parents, she is predeceased by her son, Gentry Wright Martin and her brother and sister-in-law, Richard and Margaret Erskine Caldwell.

Frances was deeply involved in her community through multiple organizations and her church, First Christian Church of Danville.  She was one of the organizers of the Danville Humane Society as animals were a lifelong passion for her.  She was the President of the first Weight Watchers group in Danville and with her husband Joe, was an avid swimmer, tennis player, boater, bridge player. They were most famously known for their partner dancing, whether it was the Swing, Jitterbug, Fox Trot, Disco, Country, or line dancing.
Frances is survived by her daughter, Mary Cynthia Martin and her husband, John Feldman, her niece Charlotte Caldwell, her extended family  of “nieces and nephews” in Danville and Washington DC, and her beloved dogs Willie and Kate.