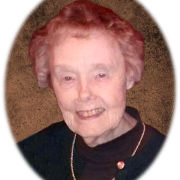 Dorothy Alice Anthony Sagar, 95, of Danville, died Wednesday, December 28, 2022 in Mt. Washington, Ky.  She was born July 28, 1927 in Cincinnati, Ohio, daughter of the late Henry L. and Dorothy Bevis Anthony.  Dorothy earned her Bachelor’s Degree in Medical Technology at the University of Cincinnati. She began her career as a lab technician at Ohio State University where she met the love of her life. She was married to the late William Clayton Sagar in 1953. They built a beautiful life and family in Danville, Kentucky where she provided care to Centre College students at the Infirmary for 20 years. Dorothy was an active member of The Presbyterian Church, Danville, the Homemakers Organization, volunteered at Ephraim McDowell Regional Medical Center where she was a member of the Hospital Auxiliary and she taught Sunday School at The Presbyterian Church for many years. The couple was very active in local charities including Habitat for Humanity, Meals on Wheels, Salvation Army as well as numerous mission trips to serve others.

A Memorial Service to celebrate the life of both Dorothy and William (who passed in 2020) will be held at 11 a.m., Thursday, January 5, 2023, at The Presbyterian Church. Rev. Caroline Kelly will officiate.  A reception will follow in the church fellowship hall. Memorial donations are suggested to The Presbyterian Church or the charity of your choice.