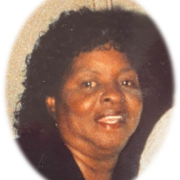 Dora Simpson Yocum entered into Heaven’s gates early Friday morning, December 16, 2022 at the age of 87 at Danville Center for Health and Rehabilitation.  Dora was born on July 29, 1935in Parksville, KY to the union of Coleman and Louise Simpson who preceded her in death.  Also preceding Dora in death were four sisters, Lillian Baker, Mary Lancaster, Anna Brand and Evelyn Simpson; two brothers, James Lancaster and Coleman Simpson, Jr.; one grandson, Anthony M. Napier.

​Dora retired from Centre College after 35 years of service.  Dora loved spending time with her family and keeping in contact over the phone.  Dora’s family members could almost be guaranteed a birthday serenade in the form of a phone call from Dora.  Before sickness slowed her down, Dora enjoyed working with her flowers producing some of the most beautiful plants and you could also catch her out shopping, always looking for a bargain.  All who were fortunate to be in Dora’s presence were blessed with laughter and good times.

The funeral service will be 1 p.m., Wednesday at St. James AME Church with Rev. Ralph Smith and Rev. William Jenkins officiating. Visitation will be 12 p.m., Wednesday until the time of service. Burial will follow in Hilldale Cemetery.