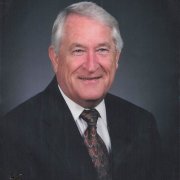 Basil Waites Turbyfill, 86, died Wednesday, September 7, 2022, surrounded by his family. He was born November 28, 1935, to the late Clifton and Roberta Shook Turbyfill in Maiden, North Carolina. Basil graduated with honors from North Carolina State University and Harvard Business School. He was the owner of several small businesses and was President of Athens Furniture in Tennessee. In 1985, he purchased Jackson Furniture in Danville, Kentucky. Through multiple expansions into new product lines and new markets, he eventually employed over 200 people. He was a caring and generous business owner who was respected and loved by his employees. He treated all employees like family and insisted no one worked for him, everyone worked together.

Basil held many civic roles as well as being a civil servant, serving as Mayor of Athens, Tennessee, and City Council Athens, Tennessee. He also received the Athens Chamber of Commerce Young Man of the Year and Man of the Year Awards. He was involved in local and state politics holding numerous leadership positions in the Republican Party, an advisor to Governors in Tennessee and Kentucky, and as Deputy Secretary of the Finance and Administration Cabinet, Kentucky. Basil was an active Philanthropist including leading an effort for fundraising to build the YMCA in Athens, Tennessee. He loved his Church, his family, employees, and friends. Basil loved his country and serving his community and as such, he loved giving more than receiving. His greatest joy was seeing the happiness of others. He enjoyed Gospel Music and conversation with the Old Goats Club. Basil is an active member of First Baptist Church in Danville, KY and Former Deacon, First Baptist Church Athens, TN. In addition to his parents, he was predeceased by a brother, McCoy Turbyfill; and a sister, Clifteen Turbyfill Withers.

Visitation will be 4-6 p.m., Monday at Stith Funeral Home. Funeral service will be 1 p.m. Tuesday at Stith Funeral Home with Rev. Timothy Mathis officiating. Burial will be in Bellevue Cemetery. In lieu of flowers, donations can be made to First Baptist Church in Danville, KY, or to Wilderness Trace Child Development Center in Danville, KY. Online guestbook and Hugs from Home available at www.stithcares.com